Japanese Beetles: What You Need to Know

Summer is coming, and so are the Japanese Beetles!

Japanese Beetles are many gardeners’ worst nightmare. These metallic creepy crawlers appear in hordes in the late spring with one goal: destroy your garden. They enact their damage very quickly and efficiently, turning foliage into lace. After witnessing how these pests can devastate the plants you’ve worked so hard to grow, the thought of them will keep any gardener up at night.

Japanese Beetles are an invasive foreign pest that have been plaguing the US since the early 1900s. Because this is not a native pest, they are especially difficult to control because they lack natural predators in this environment.

In their adult stage, they are about the size of a dime with a metallic-green body, bronze wings, and tufts of white hair on their sides. The Japanese Beetle does look quite similar to a June Bug, but it is important to distinguish the two as the latter is not nearly as devastating to plants. A June Bug is much larger than a Japanese Beetle, and they have bright metallic green wings in contrast to the Japanese Beetle’s bronze wings. 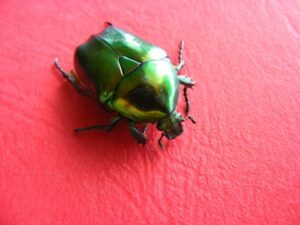 The beetles will appear as adults in late spring and last throughout the summer, feeding on foliage. The females will lay their eggs which hatch into grubs that feed on roots. In the fall, they will burrow farther down in the soil to lie dormant for the winter. They awaken to feast on roots again in the spring until they become pupae and then adults, beginning the cycle over again.

In terms of control, Japanese Beetles are quite a difficult problem to fix. The most effective method to deal with adult Japanese Beetles on your plants, and what we do in our Garden Center, is to manually remove them from foliage and drop them into a bucket of soapy water. The water only needs a couple drops of soap to break the surface tension, which will keep them from surfacing and cause them to drown.

For a spray method of control, Neem Oil and insecticides containing Pyrethrin can help. Applying Neem immediately to your plant’s leaves after seeing the adults will help keep them from feeding on your foliage. It does not kill the adults directly, but will instead pass on to their eggs which renders them unable to hatch. At For Garden’s Sake we carry ready-to-use and concentrated Neem Oil, as well as Ferti-lome Triple Action, which utilizes Pyrethrin and Neem. It is important to use these insecticides as directed on the label to keep from leaf burn.

To reduce grub population in the soil, Milky Spore is a great long-term solution. The bacterium will cause disease in the grub upon ingestion. It builds up in turf over a period of 2 to 4 years after application, making it more of a long-term investment. Grubs will become diseased after ingestion and die, which then releases billions more spores back into the soil. This helps disrupt the life cycle over time.

Releasing parasitic nematodes in the soil can also help reduce grubs. The nematodes parasitically infect the grubs and feed on them until death. The best commercial variety of nematode for Japanese Beetle control is Heterorhabditis bacteriophora. This is a great beneficial insect option that will not disrupt pollinators and the surrounding environment.

Physical traps that attract the beetles can help but are not wholly effective. Make sure to place the traps as far away from your garden and favorite plants as possible, as the attractants in the traps will draw the beetles to the general area to feed.

Certain plants are more susceptible to Japanese Beetle feeding. Examples of these include:

Thankfully there are some that tend to be more resistant (but certainly not absolute). Utilizing these can help keep Japanese Beetle damage at a minimum in your garden. Examples include:

When dealing with Japanese Beetles, the best way to approach the problem is by addressing both the adults and the grubs to wipe the life cycle out completely. Since they move across large areas, communicating with your neighbors about Japanese Beetle control throughout the neighborhood is going to greatly help reduce the population in each individual garden.

If you have any more questions about controlling Japanese Beetles, please come visit us. We are happy to help!